Social media is instantaneous. It connects us and keeps us informed in real time. It’s a sea of networks that feed off each other for information. It has the ability to create a viral sensation quickly – sometimes too fast. In an age where social media is interwoven into the fabric of everyday life, a plan for online reputation management is paramount.

Last week saw UK burger outlet, Byron Burgers, at the centre of a viral social media incident. In a nutshell, a number of people were found to be illegally working at Byron Burgers in a raid by the Home Office and were subsequently deported.  The story trended on Twitter and was covered by various  mainstream media outlets. The incident was high profile and widely discussed but, was it a crisis?

The topic started trending on the Wednesday when the story broke and was still trending the next day: 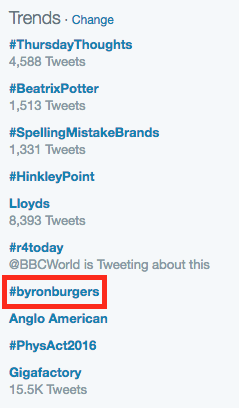 Like many breaking stories, I found out about this issue after it started trending on Twitter on the Wednesday afternoon. I looked at the montage of Tweets published at the time and pieced together that the story consisted of a workplace raid but the reasoning was vague. I Googled for news coverage which at that stage, returned very little. On the Thursday however, the topic had been covered by major media titles which amplified attention to the situation, and contributed to the story still to be trending on Twitter.

Users started a call to boycott the brand following the raids:

It’s been reported the employees involved in the incident thought they were attending a training meeting before the Home Office conducted the raid. This led people to question the company’s involvement:

The reporting of people working illegally at Byron Burgers reignited elements of the Brexit debate:

Following the story breaking, protest groups released bugs in two Byron Burger stores causing them to temporarily close. A store in the city was also closed on Monday afternoon citing a ‘technical issue’ as a public rally of approximately 200 people took place outside the shop. 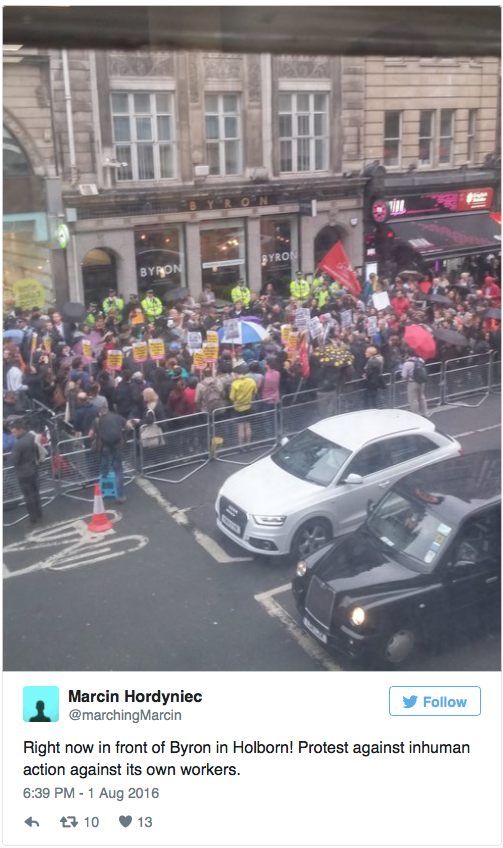 Others seized the chance to capitalise on the story presented:

And of course, some tried to put a comic spin on the issue:

How did Byron Burgers handle the issue?

Initially they released a statement the following day: 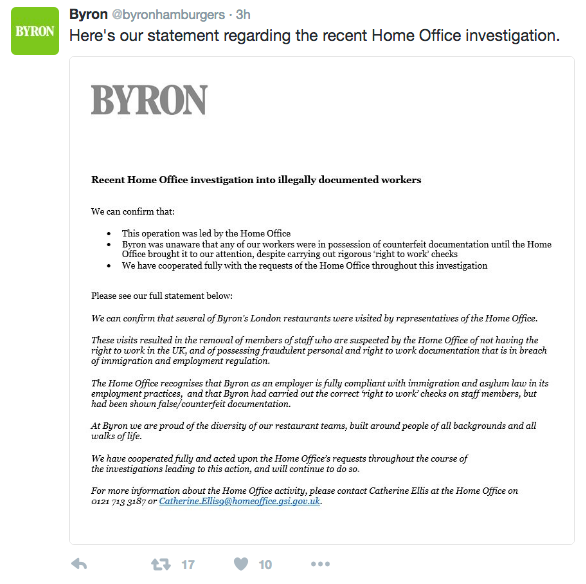 After the release of bugs in stores and a public rally, Byron Burgers pinned another statement to their Twitter page: 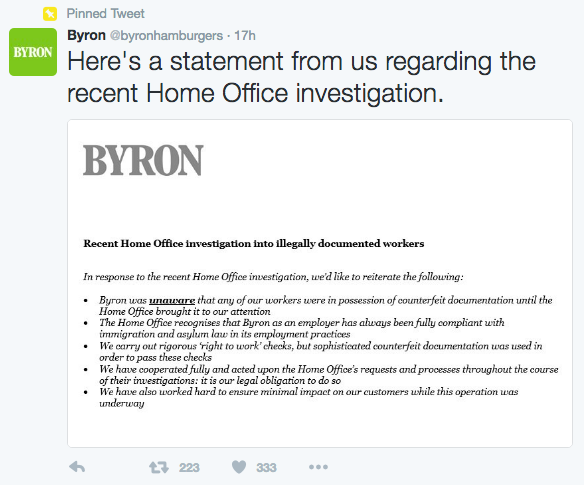 The initial statement was short and succinct, detailing the company’s knowledge and cooperation with the Home Office. It also took the opportunity to refer further questions about the incident directly to the Home Office. Whilst the issue was topical, the corporate channel didn’t publish any business as usual posts, but did reply to regular customer enquiries. Although other customers used replies as an opportunity to discuss the immigration issue, the corporate channel didn’t reengage with posts involving the incident.

For Byron Burgers, I believe this was, and still is, a crisis; one which may continue to rumble on for some time to come. It is also a crisis which appears to have been inflated and amplified by the wider overarching and interlinked issues of Brexit/immigration.

Byron Burgers will need to act and act quickly if it is to minimise harm to its reputation. After all reputation management is vital, as a perceived loss in reputation can lead to a decline in revenue and in turn, a bruised bottom line.