The tax reputation bombshell: could your organisation be next?

Brits have a complex relationship with business. On the one hand, there’s widespread admiration for entrepreneurs like Sir Richard Branson and an audience that enjoys watching Lord Sugar delivering commercial home truths in the Boardroom on The Apprentice. But on the other, Ipsos-MORI found 7 out of 10 Brits feel that business has lost the trust of the public, and half feel this has got worse since the financial crisis.

We like plucky entrepreneurs, but dislike faceless corporations. So is success just about giving your corporation a human face?

It seems the issues people feel businesses need to address are more complex than that: head and shoulders above the others are corporate tax avoidance and executive pay: 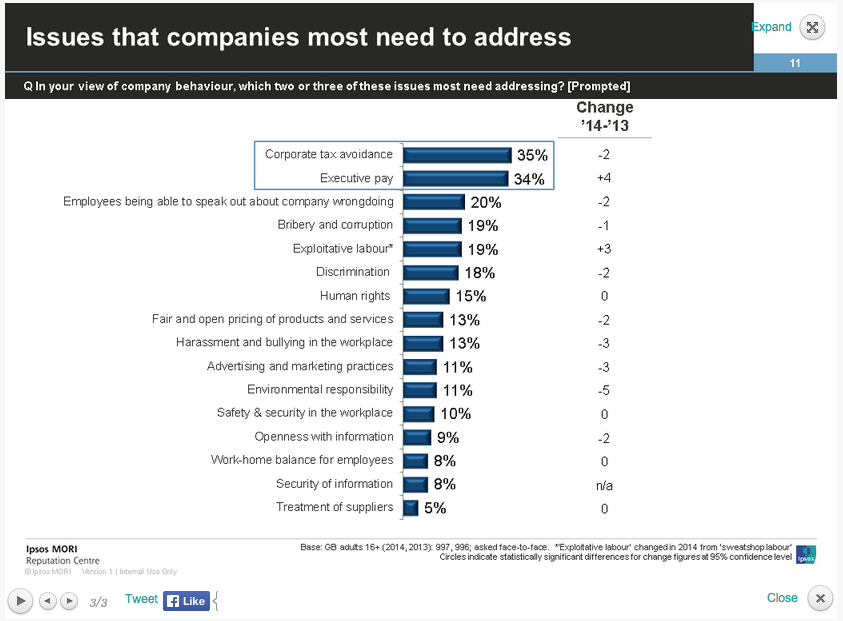 As election season has ramped up in the UK over the last few months, elaborate tax avoidance schemes have hit the headlines again and again, as part of a ‘rising tide’ in perception that large corporations from Starbucks to HSBC, Amazon to Vodafone are unfairly minimising taxes on their business operations. It seems likely that, regardless of the outcome, we’ll see more pressure coming from politicians using law, regulation and the bully pulpit to put pressure on organisations to pay a fairer share of tax.

It’s been a recurring theme for individual business people and celebrities too, both those reported to be ‘dodging’ taxes, and spotting a tactical PR opportunity by coming out against these kind of schemes. HSBC’s chief executive Stuart Gulliver was forced to apologise for his own remuneration arrangements, which involved a convoluted route via a Swiss bank account.

At its core, tax avoidance is a reputational issue about perceived fairness, in a political environment where public spending is waning and the economy is emerging from recession. In communications terms it’s a thorny and volatile problem to manage:

Social media, coupled with action by regulators around the world to require greater transparency in reporting, enables a new level of public scrutiny of corporate financial arrangements. It offers campaigners a platform to mobilise and organise against perceived underhand behaviour through boycotts or hijacking of marketing campaigns, as Starbucks found to its cost.

Crisis and issue planning within the organisations we work with has been gradually adapting to the challenge of communicating complex issues such as cyber security and supply chain ethics. But how prepared are firms for a tax bombshell exploding near them in the coming months?