The skills of modern media relations

The popular picture of crisis communication is maybe a high-stakes press conference, or the chief executive being grilled by a well-known broadcast journalist or politician. We imagine brand reputations living or dying by how well leaders can demonstrate empathy on camera; or how adroitly the press conference can be stage-managed.

There’s no doubt these are critical moments in the spotlight, and that those kinds of media handling skills are crucial when you’re in those situations. But I’d speculate 80 or 90% of ‘crisis’ situations communications teams encounter – unless you’re at the sharp end of managing large incidents – won’t feel like that.

The modern reality of managing issues and crises is, in some ways, more mundane.

The combination of savage cuts to newsroom budgets, particularly in local and trade press, and the speed of publishing via social media means that bad news won’t necessarily play out in a press conference or with a reporter on your doorstep. It will be happening in emails and Facebook groups, WhatsApp groups and comment threads under an influencer’s heartbreaking story. The media, your regulators and other stakeholders will still be interested and alert to the story, but in new ways and in new places.

You can think of it as a shift from a gladiatorial contest in the arena, to a whispered rumour filtering through a crowd.

There’s opportunity in this fragmentation for those trying to protect reputations. With more time and visibility of the situation, you have a better chance of successfully picking issues up early and addressing them clearly. You can do more in peacetime to ensure you hear those rumours when they start, and put a reasonable case of your own into the discourse, backed up by reasons to believe and something for your allies to share.

In practical terms, these are the modern media management skills we’re building into the workshops and training exercises we run, taking things further than classic media training tends to.

Your team needs the tools, skills and practice not simply to come across well on camera but to produce video in-house at speed and reasonable quality. With a smaller newsroom staff, journalists are increasingly working from their desks or from home, sourcing what they can from social media or what their contacts can send them.

Don’t bother fitting out a fancy video suite: it’s more about having a few sets of basic kit in the right places (lapel mics, cheap tripods, grips or gimbals, basic lights and editing software) and practising using them. Not least, the video you need to come across in a credible way probably won’t come from the leader you can get into your studio anyway: it will be from those managing your front line staff or technical experts dealing with the problem.

Our Chief Operating Officer Khadir Meer on this afternoon's incident on #LondonBridge– on our response, thanking our emergency services colleagues and how our thoughts are with all affected by what happened today. pic.twitter.com/RrMJGsthua

You need to be asking yourself: how quickly could you turn round a decent video of your credible spokesperson or evidence of your response in action, and get it to online journalists and put it on your social channels?

In the modern media world, you have a shot both at feeding those writing the story and telling it on your own terms.

You might be lucky and find a media organisation interested enough in your situation to produce an explainer on the context and quote you fairly. Then again, you might not.

So, learn to make shareable materials that put your case fairly to those who take an interest. Tools like Canva help you produce basic social graphics cheaply. You need the agility to publish multimedia content quickly to your corporate site and across your social channels too so you don’t miss your moment in the spotlight.

We thank #WarOnPlastic for pushing change.

Consumers should be able to benefit from plastics over and over again – recycled and reused not thrown away to end up in our seas.

We support preventing food and energy waste through packaging that is both necessary and well managed. pic.twitter.com/H1kRwMTETh

And bear in mind the Googling media – and the activists or experts they talk to – have access to a lot more context than you might imagine. In the modern media world, there’s data about ownership structures, director remuneration, vessel or aircraft movements, past controversies, court judgements, personal social media profiles and plenty more online. Media organisations like The Bureau of Investigative Journalism do impressive work stitching stories together from these sources, whether you deign to ‘release’ data or not.

In the old media world, your audience for this kind of thing was the people who came to your press conference or picked up your press release. There’s an industry of media monitoring tools and agencies now who have bolted social monitoring onto their monthly retainer – but how useful is what they give you?

We see reports based solely on mainstream media and Twitter, when the most useful discussion is happening on other platforms, unheard by the brands involved. Likewise, focussing on celebrity and media pickup or counting numbers in order to report them, rather than asking who’s really influential on a topic, and what real-world language they use. ‘Fake news’ makes this all the more important: chances are, the really dangerous rumours won’t start in the mainstream media or public social channels, but in niche communities and forums. 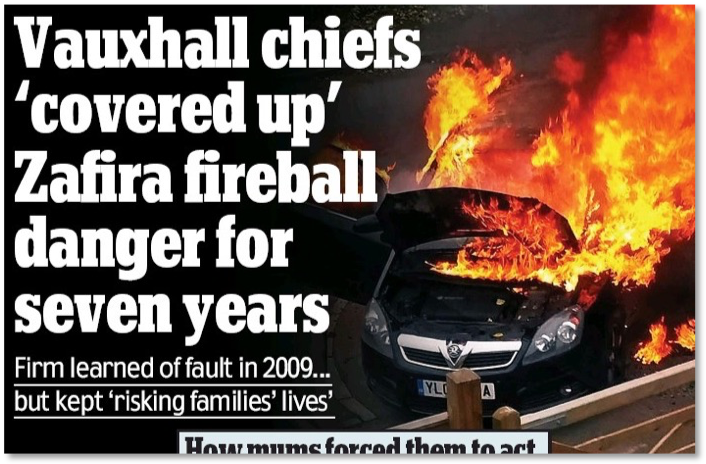 A private Facebook group set up by owners of Zafira vehicles grew to 14,000 members, and a hub for organising against the company

Understanding the crowd, and who leads or moderates the rumours within them, takes a more nuanced approach, asking tougher questions. it also means being willing to do some of the legwork yourself to listen directly to some of the really influential voices, and maybe build a relationship with the constructive ones in peacetime, so you have channels of communication open when you really need them.

Working in the modern media world is about adapting to the reality that full-time journalists are fewer and further between, and in the space that’s opened up, there’s an opportunity to tackle misinformation and set the record straight if you tell a credible story to those in the community with real influence.

It’s less about spinning the perfect release, and more about being willing to take a walk into the crowd, and talk to people.